The national Parks people run cruises in the gorge and we decided to take the early one at 8am.

Good choice. It was still cool on the river and there were hardly any passengers. Bout 10 people all up including the 3 of us. A short cruise up stream through the gorge. Spectacular limestone cliffs showing the 'high-water' marks of the seasonal flooding. The ranger was informative and easy going. Pointing out lots of interesting stuff, including the fresh water crocs that even this early in the day were already leaving the water to sun themselves on convenient rock ledges under the limestone cliffs, or on the sandy banks on the river bends. 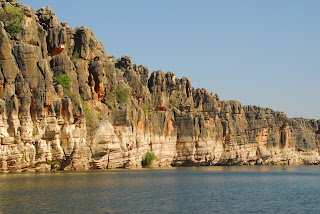 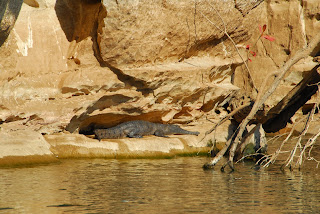 It's clear that during the wet a tremendous volume of water flows down these Kimberly rivers. Apparently it is not unusual for Fitzroy Crossing to become Fitzroy island for weeks at a time as they township is cut off on both sides by floodwaters.

Back on shore by 9:00pm and back to the Fitzroy Lodge via the supermarket. A lazy day catching up with washing, blogging and reading. Radio reports of bush fires in the Broome area closing the road, so we will have to see what tomorrow brings. It's almost 400km from here to Broome, so we may stop 2/3rd of the way there. Depending on whether or not we can find a camp site that meets our standards!

Posted by DrParnassus at 7:30 PM