The original plan had been to use Tomintoul as a base to explore the local area, which is why I had arranged to spend 2 nights at The Richmond Arms.
Well as the locals would say '"The best-laid schemes o' mice an' men gang aft agley."
When I awoke and ventured to look out the windows, snow flurries filled the air and a strong wind was punishing the trees.
It was cold enough that the snow had started to settle on the ground and the surrounding hills were white. It looked and felt more like mid winter than mid summer. Clearly not much riding would be done today.
At breakfast we were informed by our host that the high road (the road I had come in on yesterday) was closed to traffic due to snow and high winds, and on current forecasts was likely to remain closed for the next 24 hours. The 3 Irish bikers and the Aussie couple who were planning to head that way, were forced to change plans and head back down the only other road into Tomintoul.
I decided to sit back, relax and see what the day would bring. If by some miracle the weather improved I would take the bike out.
As forecasted though, other weather did not improve. Snow/sleet/cold rain came and went the whole day. Occasionally the sun would put in a brief dazzling appearance, before yet another squall passed through.
During one extended sunny break, around 1pm, I ventured out for a brisk walk. Although the sun was shinning, it was cold and the strong gusty wind made it even colder. Had lunch ( hot soup) in the local cafe and explored the whisky shop next door before retreating back to the hotel as yet another squally shower passed through.
I did notice on my brisk walk around the village that there were two other hotels in town - but both were shut and boarded up. Clearly the Tomintoul has seen better days.
Finished my book in the afternoon, surfed the net, checked and rechecked the weather reports. Hopefully tomorrow the weather will start to improve - it is forecasted to be cold but sunny over the weekend. But whatever it is, I will be back on the road.
A quiet dinner at the hotel. Joined by another couple - he German - she a kiwi. They had the Haggis. I opted for the pasta with mushroom sauce. Sampled some of the local whiskies - enjoyed stimulating after dinner conversation with my dining companions and the owners of the hotel. 10:30pm and time to write this blog and hit the sack. And so to bed. 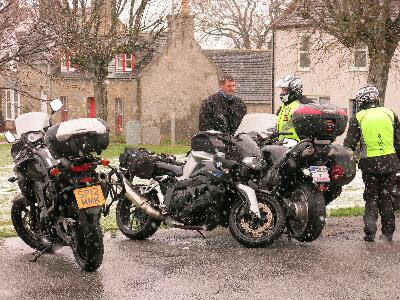 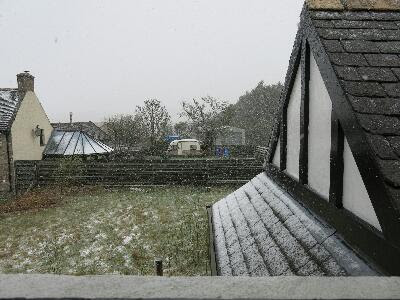 Posted by DrParnassus at 8:33 AM