Reflections & impressions prior to departure - Celeste

Nothing like having 2 hours to spare in an airport to inspire one to pause & reflect.
Waiting in Ataturk domestic airport Istanbul, in transit from the sea to the Anatolian mountains, Cappadocia.
Being in Turkey for nearly 3 weeks has shown us how amazingly diverse a country it is with many surprises.
Probably most surprising of all is how mountainous and scenic it is, with lots of lush fertile ground. We saw an entire valley end to end filled with hothouses which grow mainly tomatoes, but also peppers & eggplant, 'enough to feed the whole of Turkey and Eastern Europe' according to Ahmet, our indefatigable host in Kas. Must admit, the tomatoes are delicious...but more about food later.
Then there are the roads and general infrastructure. Incredibly good roads, specially in the mountainous areas. Also free excellent WiFi everywhere.
Lots of new apartments being built and solar hot water on every roof.
Many many cats everywhere, but fewer dogs. Turks appear to love cats and people feed them in the streets.
The call to prayer 5 times a day - takes a few days for it to blend into the background but is ever present, as is Islam in general but in a very low-key & relaxed way.
The history of course is mind boggling, and the people are warm, welcoming, friendly and very polite. A sense of cleanliness is evident in the washing before entering mosques, Turkish baths, and the obsession with washing vehicles. Water supply doesn't seem to be a problem!
Food - well, we have absorbed Turkish food very well into our normal lives in Australia so no real surprises. The quality is variable, great for vegetarians, and some very good fish. It does get monotonous as there's no variation in the meze (entrees, almost entirely vegetarian) that we have almost every day. So the odd pasta dish has been very welcome.
Yogurt very good, bread in copious quantities, lots of delicious sweet things.
Fresh juices great - specially pomegranate and orange, but a very good homemade lemon juice also very good.
Lots of savoury stuff at breakfast, coffee variable. Turkish coffee 'good but no substitute for a decent double shot espresso' (Bill) - few and far between. Latte highly variable and expensive.
The economy looks to be in good shape, and systems seem to run well. Unemployment around 8%, pretty good in this region.
'People watching' is wonderful. Being a crossroad of many cultures, its just fascinating wondering where they all come from.
The tourism machine is well oiled, specially at the food 'factories' where many busloads of people are dealt with in a very efficient way mainly at lunch time, it appears. Huge buffets usually but not always. These have been included on all our day tours & would certainly not have been our choice, but nevertheless filled us up.

...few days later, this time on flight back to Istanbul. Turkish airlines impressive - prompt, efficient with good food too.

So far so good...tomorrow Bill & I will experience their international flights to Edinburgh & Belgrade.

So all in all, an emerging economy which seems to be doing well, and proud friendly people with extraordinary landscapes and history.

PS - just seen on the news that there had been a fatal balloon accident in Goreme yesterday morning. A bit of a shock, as we had been raving to other tourists how good it had been. Still - given the numbers it is probably inevitable that there will be the occasional incident.
On the way to the airport today we talked about how we had not witnessed or seen the aftermath of any traffic accidents. Again amazing given the volume of traffic and the Laissez-faire attitude to road rules.
So it goes...... 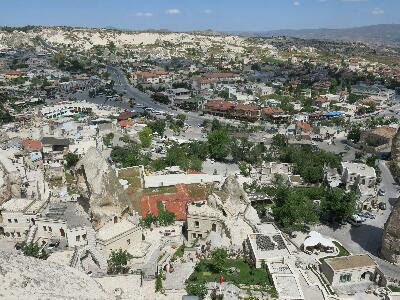 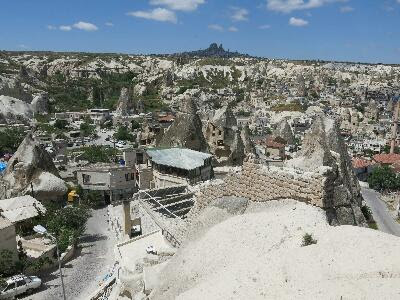 Posted by DrParnassus at 2:25 AM