Although the Caledonian Inn bar and restaurant had been packed the night before, I was the only overnight guest and had a solitary breakfast after a quick morning stroll around Robe. 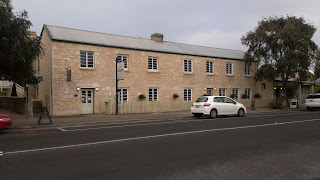 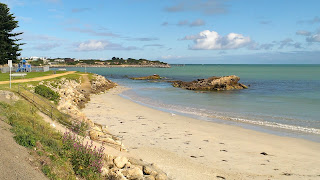 The Inn backs on to the beach with a block of guest cottages facing out over the bay. Robe has lots of heritage buildings that have been restored and well maintained. The harbour has been turned into a marina, and of all the 'so-called' southern ports, it is by far the most prosperous.

Stopped into Beachport and Southport as I meandered down the coast towards Mt Gambier. The wind continued to blast out of the south and the temperature never rose above 16 degrees.

When I was camping in Rapid Bay, a fellow traveller asked which way I was heading. When I told him I was planning to follow the coast as much as possible, told me to keep my eyes open for Woakwine Cutting. I forgot all about it until today when a sign appeared between Robe and Beachport. I cannot decide if it should be considered a monument to folly or determination – probably both. The sign tells it all. 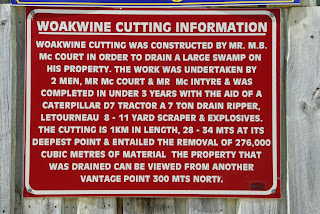 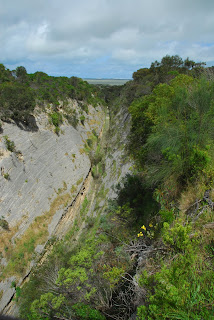 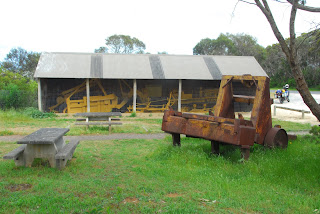 Although the morning had remained dry, as I approached Mt Gambier the showers started again. Mt Gambier to pick up food & supplies for the next few days.

Tired of the wind I decided to head inland I the hope that it will be more sheltered. Up the highway north towards Coonawarra / Penola through yet more wine country. Also large pine plantations – which did provide a bit of protection from the wind. A Penola I turned east again onto a back road to Casterton. Very quiet road, through a mixture of lush pastures and more pine plantations.

Casterton has a small caravan park run by the council – cheap no frills, but at least it has hot showers, a laundry and a patch of grass to pitch the tent. It is also almost deserted. Perfect for the night. As I set up camp, the wind abated and the sky cleared. Lets hope it continues. The forecast is looking good, even if the predicted overnight temperature is 4 degrees! 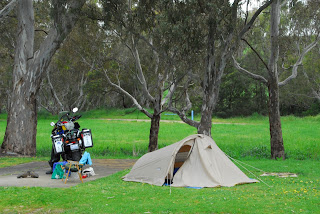