A lazy start to the day. Dropped the bike off at 10:15am and collected it at 11:15am. Although the morning had started off as fine, by the time I was heading out of Albany it had clouded over again. Fortunately within half an hour the cloud had gone and the sky was clear. Perfect weather and a surprisingly interesting landscape. Heading east from Albany, the countryside soon opened out, with fewer trees and huge fields of wheat. After spending the last few days riding through dense forest, it was good to feel out in the open once again.

I've really enjoyed our time in the SW of Western Australia – despite the less than perfect weather. Great scenery and great roads combined for great riding.

I was hoping to catch M & U in Esperance, but Marco sent a text message to say that it was grey and overcast in Esperance and that they were heading north about 75km on the road to Norseman for the night. Although I was making good time, after leaving Ravensthorpe, I caught up with the wet weather. The closer I got to Esperance the greyer it became and the temperature dropped from the mid twenties to 17 degrees.The road was soaked, with standing water indicating that it had rain quite heavily, but I was just behind the worst of it as the front moved slowly to the east. At the outskirts of Esperance the sun started to reappear as it started to set. For the last few km into town I was chasing rainbows. 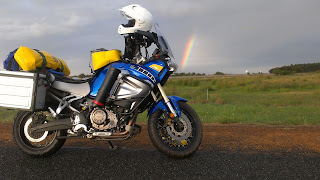 If I was going to chase M & U, then I'd have by-passed Esperance – somewhere I have always wanted to see. So I followed the bad weather into town, in time to catch a spectacular sunset then found a motel for the night. An indulgence for sure but what the hell. 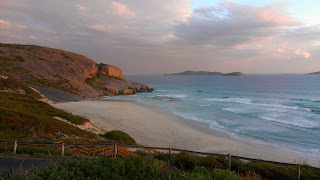 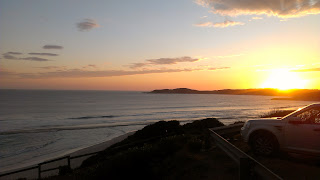 Tomorrow I should catch up with M & U in Norseman before we head east across the Nullarbor.