Day dawned overcast with the threat of rain. Breakfast of orange juice only, packed and on the road before 7:30am. 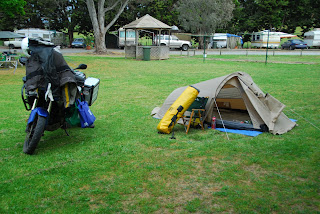 Continued my cruise down the ranges from north to south. Destination Hahndorf and a cooked breakfast as a treat. Countryside was splendid lush green pastures mixed with vineyards and orchards. Lots of large 'Country Estates'. Great roads as well. Had to keep alert to morning commuter traffic – in a hurry to get to work – poor fools!
Hahndorf is “cutesville” - like so many of the small towsn and villages in the Adelaide hills very picturesque and very 'tourist oriented'. 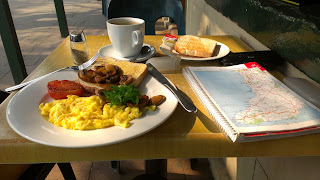 On to Mt Barker for a supermarket shop for the days provisions, then an epic ride down the Fleurieu Peninsula through farms and forest until the road reaches the coast at Normanville. Great riding, with interesting hills along the coast. 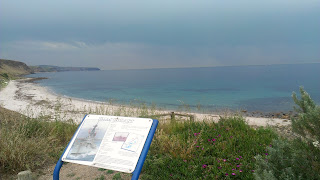 Stopped at a lookout that commemorates the HMAS Hobart. It was sunk for use as a diving wreck just off the coast here. 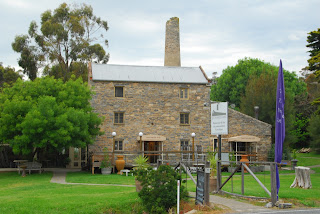 The further down the peninsula I rode, the more threatening the weather became. Rode down a spectacular road dropping down from the hills to Rapid Bay through green hills tinged purple by Paterson's Curse. 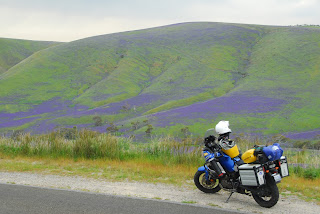 I arrive at Rapid Bay camp ground just as it starts to rain. A picnic shelter provides welcome cover for lunch while I contemplate my next move. After lunch and a cup of tea – punctuated by frequent showers I decide thus is as good a place ass any to spend the night. A good cheap camp ground, deserted except for a few other travellers. A spectacular setting and with the weather looking like it may clear later I saw no need to continue further. The rest of Fleurieu Peninsula can wait for tomorrow.
After the rain stopped I went for a walk up and down the beach. Rapid Bay was once the site of a limestone mine/quarry. "The open cut mine at Rapid Bay was a major source of limestone for Broken Hill Proprietary Ltd (BHP) during the years 1942 - 1981. The limestone was shipped to BHP's steelworks at Whyalla, Newcastle and Port Kembla where it was used as metallurgical flux in production of steel." http://www.rapidbayjetty.org/history.htm

The old jetty is in ruin and slowly collapsing back into the bay. However, the state government has built a new one right alongside.

Unlike the jetty, the houses from the old mine are kept in good repair. There is even a school and an excellent cricket oval. Signs of more prosperous times, but good to see the locals are keeping them in good shape. 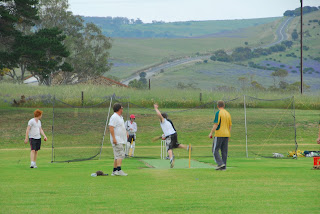 As predicted – as I type this up, at sunset, the skies have cleared, but the temperature has dropped! A cold wind is now blowing from the south west. Time for dinner and to bed.
Posted by DrParnassus at 9:03 PM