Although the wind appeared to abate during the night, by the time we were up and about it was blowing hard again, although from a more SE direction.

The Last Breakfast was had and solemn farewells taken. M & U heading north, me heading south.

Although the wind was still blowing, it was not as bad as the day before, and as I headed south it became easier, allowing me to admire the view rather than manhandle the bike. 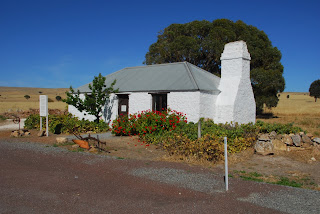 The countryside changed as I approached the Coffin By turn off. Still plenty of wheat fields, as well as what looked like canola and barley. There were also remnant pockets of native vegetation including some majestic old eucalyptus (sugar gums?). The habitat and micro-climate appeared to be quite different in this south western corner of the Eyre Peninsula. There were also some isolated peaks as well. Very pleasant riding with some actual corners on the roads! I initially bypassed Coffin Bay and proceeded on to Port Lincoln for coffee and fuel, before backtracking via Winters Lookout for a panoramic view over Port Lincoln and surrounds 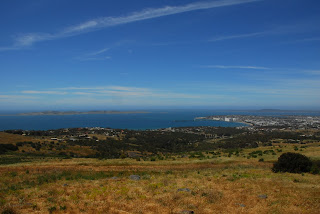 and then back to Coffin Bay. (What a name – visions of floating coffins come to mind – shades of Moby Dick. Turns out that it was named by Matthew Flinders in honour of his good friend Sir Isaac Coffin – a naval commissioner.) 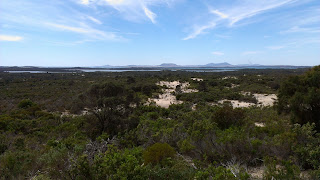 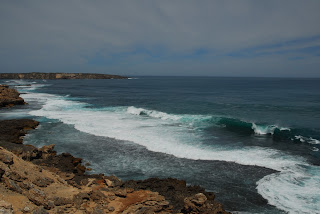 The detour to Coffin Bay was well worth it. Stunning landscape with multiple bays and inlets leading out to a spectacular coastline with views out to the islands off shore. The road out to the coast through the national park was an added bonus, full of undulations and sharp corners – great on the bike. Saw plenty of emus on the way out, accompanied by lots of chicks. Camera at the ready on the return trip I saw nothing! Just a couple of lizards and what looked like a pair of Sea Eagles in the distance.

Back inland and headed north up the middle of the peninsula to Cummins – a small town dominated by its wheat silos. 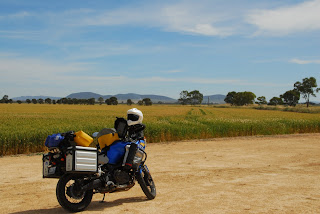 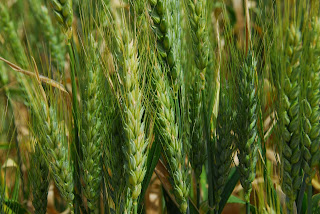 Stop for coffee and apple slice then east back down to the coast on what turned out to be a great road that climbed to a reasonable altitude, before dropping rapidly through a series of great sweeping corners down to the coast at Tumby Bay. The last stretch up the coast to Cowell was uneventful with views out east to the Spencer Gulf.

Campsite in the Harbour View Caravan Park. Tomorrow the ferry from Lucky Bay to Wallaroo. Then on to Nuriootpa and the Barossa!
Posted by DrParnassus at 10:39 PM