232km riden today covering some of the best roads in this part of the world.  The least interesting section was between Atherton and Mareeba - but that was a short 35km or so.

Dawned with low cloud and a bit of light intermittent drizzle. Nothing major but enough to force us to pack wet tents. School Point is a great camp site although it may get busy during the holidays. Certainly one of our favourite campsites.  We had the place to ourselves apart from a group of Melbourne schoolboys who hiked in and were canoeing out today. Even saw some wildlife in the early evening when we were visited by a curious long nosed bandicoot. No sign tho of the dreaded giant native white tailed rat - despite the dire warnings posted throughout the campground about how they will steal your food, eat the wires in your car, and generally make mischief.

On the way out - while we were still on the gravel road, we noticed a car that had gone over the edge on a sharp corner. Not having seen it on the way in, we stopped to check, just in case it had happened overnight or earlier this am. No sign of occupants so we pressed on. Ursala leading, followed by Marco with me bringing up the rear. We had the Bluetooth intercom working and I heard Marco warn of an approaching vehicle. They were ahead around a blind left hand corner so I couldn't see anything. I then heard Marco say it was the Park Ranger. At this point I rounded the corner to be confronted by the ranger vehicle stationary on  the right hand side of the road, with Marco slowing to a halt alongside. I had no time to stop and could only try and pass Marco on the inside. Not enough room and my back wheel slid into the drain gully at the same time as my right hand crash bars clipped Marco's left hand side pannier. Both bikes ended up on their side with Marco's pannier ripped from its mount, the contents strewn across the road. I fell on my right side with the bike landing heavily
on my right foot. Ouch. Fortunately all this happened at slow speed so apart from Marco's left pannier being worse for wear and me having a sore foot, we escaped major catastrophe.

The rangers were fantastic and after making sure nobody was injured helped us get the bikes upright and produced a crowbar so that Marco could bend his pannier mount back into workable shape. Although the pannier locking mechanism was totally shattered, we were able to jury rig a workable method to mount it securely.  Back on the road, feeling a bit chastened by our ordeal, we stopped in Atherton for cake and coffee and to lick our wounds. Apart from the busted pannier both bikes had minor damage to various plastic bits and mirrors needed to be realigned.  Could have been MUCH worse. Lesson learned?  Don't stop on corners, don't follow too closely behind. 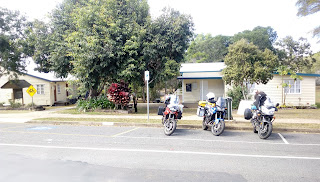 Lunch supplies procured in Mareeba we rode another 35km to Mount Malloy  to picnic.  In 2012 we had stopped at the Rifle Creek rest area just outside Mount Molloy at the intersection of the Cape York/Cooktown road, and the road down to Mossman and Port Douglas. This time, as we were going to Cooktown, we decided to overnight at the Palmer River Roadhouse - another 120km up the Cape York road. Good decision! Not only was the Rifle Creek Rest Area absolutely overrun with Grey Nomads  ( it was only 2pm!), but we got to forget our earlier woes with a great stretch of road that had plenty of twisty bits passing thru yet another different landscape.

Palmer River Roadhouse is an oasis comprising a pub, restaurant, petrol pump and small caravan park perched high on the banks of the Palmer River. New clean restrooms with hot showers. No mobile reception but a working Telstra pay phone. After helping Marco improve the pannier mount and a hot shower, we repaired to the pub for a well earned cold beer. 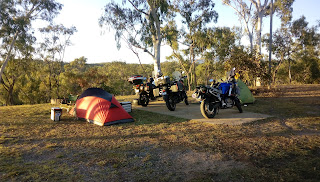 Now sitting eating our evening meal to be followed by tea, chocolate and perhaps a dram of Scotch. Tomorrow on to Cooktown......