Longest day so far on this trip. 500km. On our 2012 ride around OZ, from memory my longest day was about the same.

Hot nor'westerly was blowing all day. Blustery side winds always make riding a challenge, particularly when passed by an oncoming road train. Brought back memories of our second day crossing the Nullabor back in 2012. On top of this there were lots of kangaroos and emus about and the amount of roadkill was extraordinary. There was literally no point on todays ride where I could not see or smell a carcass. Interestingly, as the day progressed and I  moved ever southwards, the ratio of kites to crows feasting on the roadkill changed completely. Up north its the kites that festoon the carcasses, with the occasional crow. Now its the complete reverse.

I had 2 close shaves that left my system soaked in adrenaline, one with a big red roo that appeared out of nowhere from my right, bounding across the road. Drastic swerve and braking were required to avoid collision. Later I had a run in with an emu. I spotted it in time to roll off the throttle and start covering the brake. It started to leave the road and looked like it was heading into the bush. At the last minute it changed its mind and darted across the road immediately in my path.

After that I started to see emus and roos lurking everywhere..... 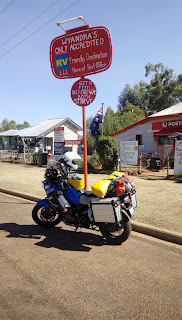 Stopped at Wyandra for a cold drink - amazing shop in the middle of nowhere about 100km north of Cunnamulla.

Decided to spoil myself tonight with a soft bed in a motel. 1st time this trip. About to head down to the pub for a cold beer and an early dinner. Should sleep well tonight!
Posted by DrParnassus at 4:48 PM