300km riden today. Possibly our longest day so far? Only just over 150km from Croydon to Normanton - on the flatest straightest least interesting stretch of road to date. Easy riding,  as the road is in good condition, little traffic with the only distractions being flocks of kites congregating over fresh road kill. They like to leave it till the last minute before taking evasive action. Unlike the occasional wedge tail, they make it look effortless as they transition from ground to air.

Cattle are also everywhere along the roadside, but barely lift their heads as we pass. From the number of cattle carcasses at the side of the road plenty fall victim to the road trains. Probably at night.

One goanna cought out by us as it was crossing the road. With three bikes passing in quick succession, it didn't know which way to run as we took evasive action. Also caught a glimpse of the Overlander Train on route between Normanton and Croydon.

Normanton reached by late morning, we set up camp in the Gulfland Motel and Caravan Park, had a swim then set off for Karumba Point for lunch. After all this time traversing Queensland, the additional 70km each way seemed a trifle. Karumba Point for some reason is a "must see" on the Grey Nomad circuit. Consequently both caravan parks are always full and it is well nigh impossible just to turn up and get a camping spot. Not sure what the attraction is? Good fishing apparently, and excellent sunsets over the Gulf. 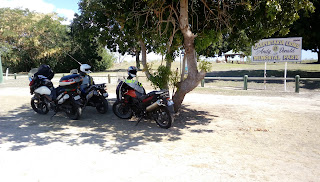 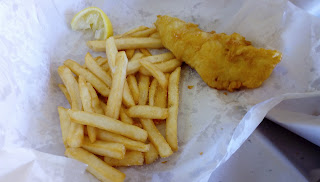 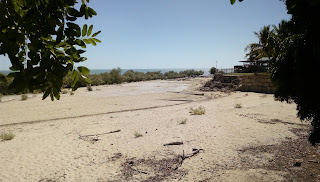 The road out to Karumba passes through a wetland area, rapidly drying out at this time of the year. Some large Brolga type birds that we suspect might have actually been Sarus Cranes.
$6 Local Fish and Chips 4 lunch at Karumba Point. Followed by a short stroll before heading back to Normanton and our campsite. Another swim before pre dinner drinks. 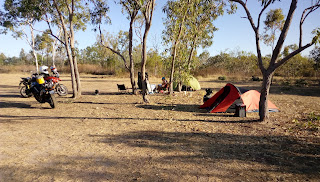 Now sitting out under the stars post dinner waiting for the waning moon to rise. Tomorrow we head south towards Cloncurry.....

Posted by DrParnassus at 8:00 PM