Ford to Glasgow via the Kintyre Peninsula and then to Portpatrick with a detour down memory lane.


Apologies for the late posting of this and the next blog entry. Lack of time and lack of WiFi access prevented my usual prompt posting on a daily basis. 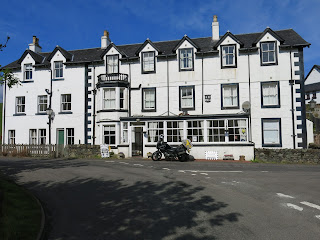 So - where were we? Ah yes south of Oban up a secondary road, deep in the hills and overnighting in the tiny hamlet of Ford. A delayed start to the day due to encountering a fellow Australian at breakfast. The consequent exchange of travel notes resulted in a prolonged breakfast and I only managed to get mobile shortly before 10am! Quelle Horreur!
As the day was fine and with Glasgow my ultimate destination I headed off southwards to Lochgilphead and the start of the Kintyre Peninsula. Lochgilphead and Ardishaig is one of the end points of the Crinan Canal. Built between 1794 and 1801, it is nine miles (14 km) long, and connects Loch Gilp with Jura Sound, providing a navigable route between the Clyde River and the Hebrides Islands. 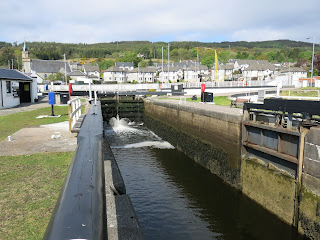 Watched as a couple of yachts passed through the entrance lock before continuing south - heading for Campbelltown. Took the eastern route down the coast, a narrow B class road, rutted and full of pot holes. Slow going, but providing stunning views to the east of the island of Arran, its mountains capped by dark squally clouds trailing showers, the tail of one briefly peppering me with icy pellets of sleet. Despite the bad road, a good ride - albeit slow. And so to Campbelltown for lunch. A pretty port surrounded by lush green hills. After lunch, and aware of time and the distance still needed to cover to get to Glasgow, I headed back up the west coast of the peninsula - this time on the main (A grade) road. Light traffic and a good road allowed for rapid progress. However, the sudden darting of a deer across the road in front of me was a reminder that eternal vigilance is the price of safety (or some such words).
Skirting round Loch Fyne and Inverary the bad weather caught up with me and the traversal of Glen Kinglas and Glen Croe through the Arrochar mountains was suitably wet and gloomy. The rain eased to a drizzle as I passed down Loch Lomond, now on the A82, a major arterial road leading straight into the belly of the beast that is Glasgow. 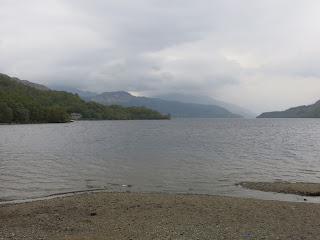 I spent the night at my brother Scott's place. An excellent (cheap) curry at a local small family restaurant - and a glass of single malt at a local pub, followed by a long talk into the night. I hadn't seen Scott in 10 years - there was lots to talk about.


On the road by 8:30 am - heading south to Portpatrick on the south west corner of Scotland directly across  the Irish Sea from Belfast. Portpatrick is sometimes referred to by the locals as the 'Scottish Riviera', due to it's relatively (by Scottish standards) benign weather. The Port is where my aunt and uncle retired to, and an attractive village with a tiny harbor that was once (a long time ago) the stepping off point for travelers to Ireland.
A detour from the direct route south to visit my childhood home of Dalry. Spent some time looking around the town. Lots has changed (road re-alignments and my old school demolished), but much remains unchanged. Including our old house and a large park in the centre of the town that I have strong memories of. 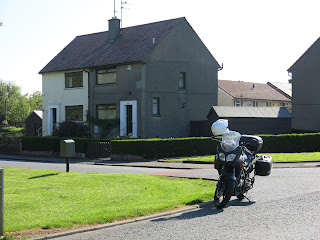 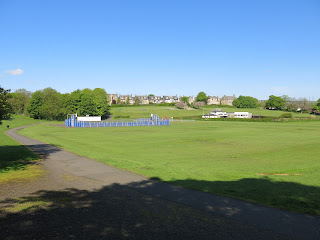 While wandering around the park, I ended up talking to a local who was out walking his dog. Turns out that David is a genealogist (http://www.rossgenealogy.co.uk/) and we had a pleasant discussion about origins and family trees.
Nostalgia put aside, and following a route suggested by David I headed to the coast and avoiding the main road as much as possible discovered a couple of delightful small coastal villages - Dunure and Maidens. 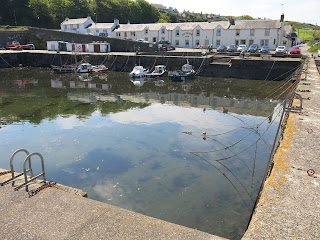 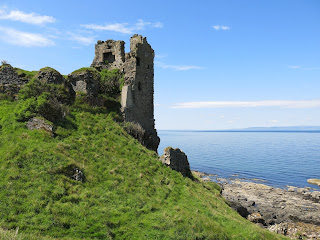 Then back onto the main road at Girvan and so on to Stranraer and Portpatrick.
Posted by DrParnassus at 7:50 AM