Can't believe it - we head bush for 3 days and emerge to find chaos in Canberra! By the time I post this Australia may well have a new Prime Minister - Yipee!

Another one bites the dust!

South of Alice we overnighted at Rainbow Valley Conservation area. A few day trippers but only 1 other camper at the official campsite. Lovely spot and spectacular colours as the sun set. 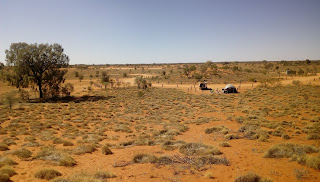 We has thought of heading further east on dirt and working our way down to Oodnadatta via Mt Dare, but after some thought decided to press on south on the sealed road to Marla and taking the track from there.

Bush camped on a dry creek bed half way between Marla and Oodnadatta. Only people there, but clearly a well used camp spot.

In the morning, continued to Oodnadatta and the Pink Roadhouse. for morning coffee and a look around. In retrospect, this stretch of the track was the roughest - lots of gravel washouts and a couple of areas of soft sand. Nothing major, just the need to drop our speed to below 50km/hr. 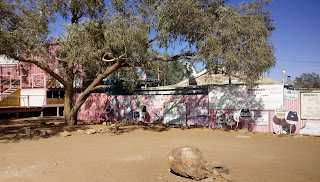 The predicted front moving thru SA was making itself felt. Strong gusty wind - cold and from the west. Saw our first clouds in many days.

By the time we got to William Creek - the wind was strong and cold and we did not need much persuasion from the William Creek Hotel owner to take up his offer of a discounted price for a donga with en-suite and access to the laundry in the campground. We had been think of pressing on to Coward Springs - another hour and a half down the track but decided to enjoy the facilities at the hotel.
This was a good move - the wind continued to blow strong and cold, the room was small but adequate with a bonus TV.  We enjoyed the meal and cold beer and the chat with fellow travelers. We did briefly toy with the idea of taking a joy flight in the morning but the wind was still strong, and there was some low cloud about. In fact there had been a few drops of rain overnight but nothing that would register in the gauge.

On to Coward Springs where we stopped to have a look around. This is a lovely oasis in the middle of nowhere and would be a great place to spend a night. It is clearly popular so I think the trick would be to arrive BEFORE lunch to ensure you got a good spot. 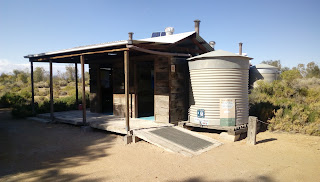 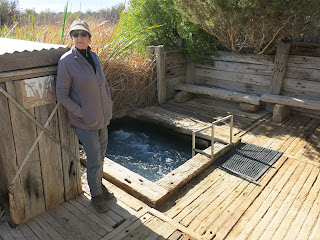 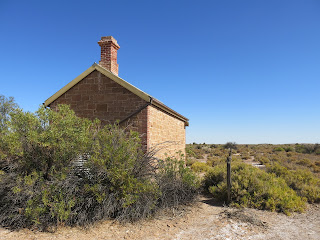 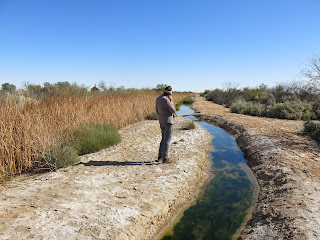 A few km further are some examples of Mound Springs - a surreal sight in the midst of the surrounding landscape. What amazed me the most was how high they were in comparison with the ground level. Clearly many thousands of years of build up of the mineral contents of the water. It is hard to imagine what they must have looked like before white settles trashed them with their cattle and cutting of the the few trees that apparently were growing around them. Bastards! It will take many thousands of years for the landscape to recover and already the flow from these mound springs is decreasing as the water is pumped from artesian wells across the basin, The aquifer is not being recharged as fast as it is being exploited. The mound spring known as The Bubbler once spouted a few meters out of the ground. Now it is just an occasional burp of muddy water.
Still impressive in its context. 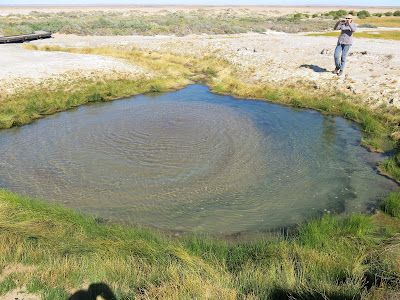 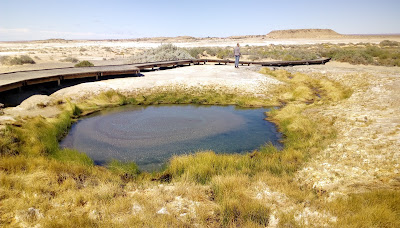 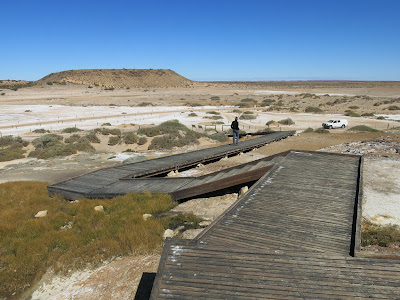 And so on to Marree and the end of the track. Stopping only to gaze out towards the southern end of Lake Eyre. 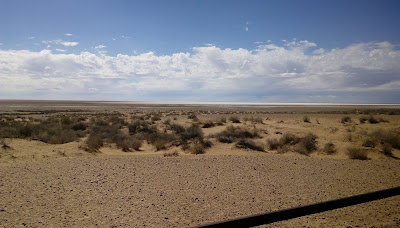 Marree for lunch and then on the Leigh Creek for the night. This is a dying mining town with heaps of underutilized infrastructure. A sad waste. I'm taking advantage of the free WiFi at the local school where pupil numbers have dropped from hundreds to just a handful.

Today - off the the Flinders - just down the road.

Posted by DrParnassus at 7:38 PM