A warmer night hints at weather to come. Up early but slow to get away. Only 200km drive so no rush.

Morning coffee in Barcaldine where we paid our respects to The Tree of Knowledge - now sadly very dead after having been poisoned in 2006 - no doubt by some cranky fascists. A sad dead stump of the old Ghost Gum remains encased in a giant cubic wind-chime. As this morning was windy the sound generated was amazing. Apparently the locals are divided along party lines as to the merits of this structure. Personally I heartily approve.
Solidarity forever.... 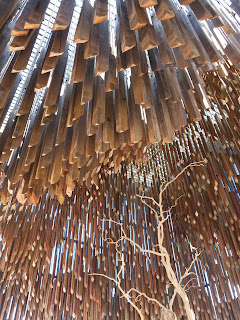 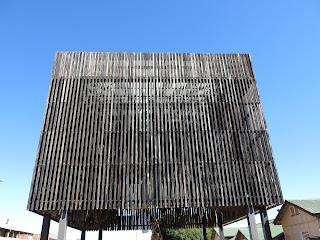 Coffee and the obligatory chat with fellow travelers. 3 motorcycles on the road from Darwin to Sydney. The proud owner of a large self contained bus towing a 4WD dual cab ute. He was heading home to South Australia.

On to Longreach and now the sight of kites squabbling with crows on who gets to feast on road-kill is continuous.

Checked into the Jumbuck Motel for a night of civilisation and on-suite facilities. Also made good use of the laundry.

Snacks for lunch then a short stroll down the road to the Qantas Founders Museum. Run by a not-for-profit charity organization that has no financial connection to Qantas Airlines, the museum is dedicated to documenting and remembering the people and events responsible for founding Queensland And Northern Territories Air Services shortly after the 1st world war.

Despite the commercial aspects and the gaggle of tourists we enjoyed the visit and the guided tour of a 747 and 707 parked on the apron next to the museum.

The 707 in particular has an amazing story attached. The 1st 707 purchased by Qantas and named City of Canberra for overtly political reasons, it went on to a checkered career before ending up in Longreach. At some point after being sold on by Qantas, it was gutted and fitted out along the lines of a luxury yacht - including solid timber lining, gold plated fixtures, fax machine, double bed with on suite and lounge room. Apparently the company behind the fit-out were hoping to sell it to some oil-rich Arabs at an air-show. Unfortunately they'd made the mistake of using pig-leather for some of the upholstery! 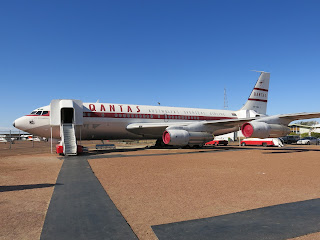 Later it was used by the Jackson 5 as a touring vehicle - I was left wondering who got to use the double bed?

Lots of other interesting things to gawk over including an old Catalina Flying Boat that was used to fly non stop from Perth to Sri-Lanka during the war. Flights that lasted from 28-30 hours - a world record that still exists. Amazingly these flights were kept secret until after the war. 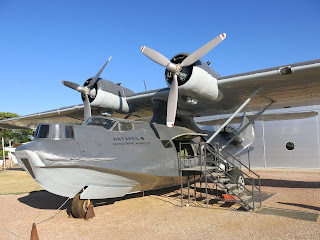 Dinner at the local bistro - cheap Barra & Chips with all the salad you can eat.

Tomorrow on to Winton. The plan is to visit the Age of Dinosaurs Museum in the morning before picking up supplies in Winton and heading out to Bladensburg NP to camp for 2 nights. Optionally we may also take a day trip out to the Lark Hill Dinosaur Stampede site on Sunday. que sera sera ....

A note from the editor: A previous blog entry made reference to Jericho being on the Jericho River. It is in fact on the Jordan River. We apologise for any confusion. "One more river, one more river. Hallelujah! One more river to cross...."

Posted by DrParnassus at 9:13 PM