A quite night on the outskirts of Cowell. 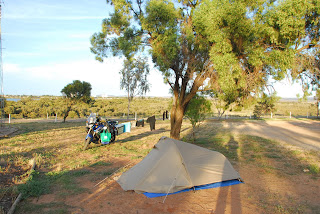 A group of riders from Perth on their way to Phillip Island for the Moto GP were already at the ferry terminal when I arrived. 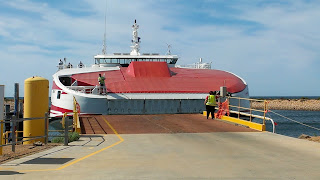 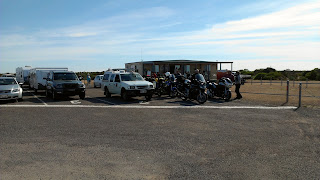 Ferry trip was uneventful, windy and choppy but otherwise OK. Just over 2 hours later we berth and I head for the hills (Adelaide Hills). The wind has now swung round almost 90 degrees from the last few days, and is hot from the north. 33 degrees at Port Wakefield where I stop for late lunch. Then east across the coastal plain across fields of cereal passing through Balaklava, Owen, Hamely Bridge, Freeling until I hit the Sturt Highway and the start of the ranges. Lovely countryside and a pleasant ride apart from the ever present wind. Some local near Hamely Bridge passed me from the opposite direction with a trailer load that was dropping debris left and right, including a couple of planks of wood. Serious evasive action was required.

Sturt Highway until the turn off for Nariootpa and the start of wine country. From Narioopta to Angaston and the start of the route down through Eden Valley to Mount Pleasant and my destination for today.

The ride from Angaston was very scenic. The route more or less follows the ridge line from north to south and is relatively elevated. Lots of old gums and some serious real estate. Stopped at the Eden Valley Lookout which had a beacon showing distances to various places. 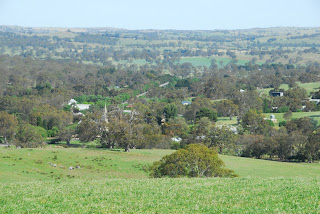 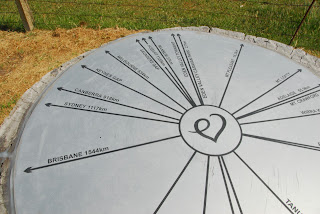 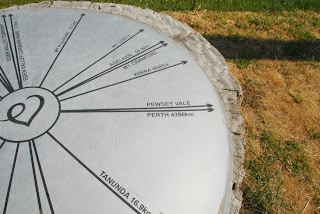 - especially when compared with the distance just covered back to Perth!

Camping in the Mount Pleasant show-ground. $10 for the night for a nice grassy camp site and hot showers. The forecast for tomorrow is looking a bit dodgy, with showers predicted as another front passes. The temperature is also going to drop. I plan on heading south along the ranges through Hahndorf before continuing to Cape Jervis and then east around the coast to Goolwa and the mouth of the Murray River. We shall see...

Posted by DrParnassus at 9:05 PM