Shortly after retiring to our tents for the night, and apparently out of nowhere,  we were hit by a thunderstorm. We had been watching lightning off to the south earlier in the evening, but the weather appeared to be passing us by. In any case it was a good test of  my new tent which passed without any leaks.

Clear fresh morning filled with the sound of  birds. Large flock of Little Corellas feeding in a paddock next door and the usual family of local magpies warbling in the trees.

Having decided to limit todays ride to a short blast up to the Bunya Mts, we had a leisurly breakfast before setting off.

Our route was via back roads, and at an intersection Ursala and Marco blasted straight ahead, apparently following their GPS's.  I was navigating using my memory of the map and road signs, and after failing to get them to turn around, headed off on my own. I was confident we'd meet up at our destination. 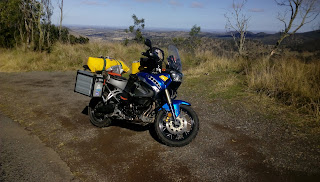 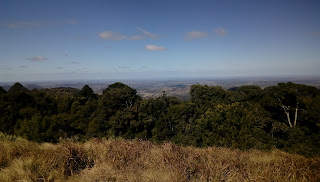 Fantastic riding up to the top of the Bunya range. The road up offered views to the south over the plains that appeared to stretch forever. Stopped a couple of times to take pics & check phone for word from my traveling companions. Stopped at Dandabah picnic area for morning coffee break. Still no sign of MandU! So picked up some bread and continued on to our campsite at Westcott Campground a few km's further down the road. Just short of the campground Marco appeared from the opposite direction. They had zipped passed Dandabah and had already pitched their tent. Marco was heading back to shop and hoping to run into me on the way.

We have Westcott Campground all to ourselves apart from a family of wallabies. A grassy clearing surrounded by forest. Lounged around after lunch, apart from a short walk. Very windy and cold, so another early dinner and we retreat to our tents and sleeping bags. 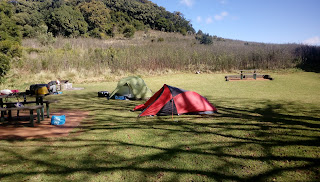 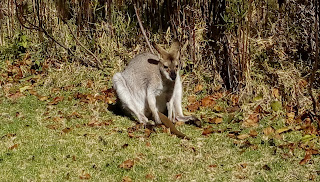 Tomorrow we're thinking of heading down towards the coast to the Glasshouse Mts. Woodford and Maleny. Hopefully warmer!

Limited mobile coverage here. May have to wait until tomorrow to post.