464 km today.
Away by 8:30 on the road to Bourke. This stretch of road should be called Emu Alley. The roadkill continued with plenty of fresh victims from the night before. A good road and again surprisingly little traffic. Solid concentration was required with constant scanning ahead left and right looking for the tell-tale "sign" that warns you "Emu Ahead!" After a while you get to recognise the shape/colour and have time to ease off the throttle and avoid any incidents. Still there are times when one or more will appear out of nowhere. A shadow cast by a tree, a drain gully next to the road.....
At first I would toot my horn to try warn them off. This was effective with the carrion birds on the roadkill,  causing them to take flight well ahead of you. I soon discovered that tooting your horn at emus only caused them to panic and scatter in all directions. Better to just ease off the throttle and take them unawares so that by the time you're among them it's to late for them to scatter. The worst scenario is when you have a flock with some on one side of the road and some on the other. They invariable decide - when they see you coming - to cross the road to join the others. The result is that they all meet in the middle of the road - just as you arrive. Hilarious.
Highpoint of the stretch to Bourke was coming across a coffee van parked outside the police station at Enngonia. Really excellent coffee with bonus home made orange fairy cupcake! A sign of the times when you can get a good coffee from a van at the side of the road in the middle of nowhere. 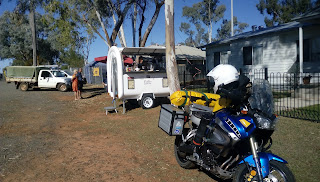 The Bourke Nyngan stretch is one of the longest straight stretches of road I've encountered - even on the Nullabor. So flat and straight you get the illusion that you are going uphill. Until you look back and it looks uphill as well! 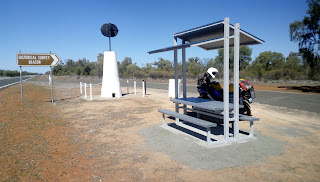 There was a historical marker just outside Bourke commemorating the laying of a survey base line out to Bourke using lengths of tape, mostly at night so that the tape length was not affected by the heat!

Approaching Nyngan the country starts to look a lot greener, and the temperature is a lot cooler. Forecast for tonight is 7 degrees. I've already zipped my padded liners into my riding gear in anticipation of tomorrow. It's looking decidedly cooler as I get closer to home.... Maybe tomorrow?
Posted by DrParnassus at 7:59 PM