The weather forecast had predicted scattered showers as we headed south. This was pretty accurate as I followed the coastal route out of Kalbarri, past Hutt Lagoon there were squalls coming in off the sea. Marco & Ursala had left Kalbarri ahead of me agreeing to meet in Geraldton, and by the time I rejoined the highway at Northampton I needed to pull over and done wet weather gear. As the showers had been fairly light and had passed quickly, I made the mistake of only putting the waterproof liner in my jacket on. Bad mistake. As I approached Geraldton, the showers turned into solid rain accompanied by a strong wind. By the time I got to Geraldton, my bottom half was soaked through. I stopped for coffee before continuing to the Museum on the waterfront where we had agreed to meet. We took time out at the museum to dry off. M & U did a quick tour of the maritime section, while I added the wet weather liners to my riding pants. 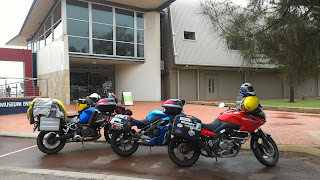 By this stage, the heavy rain had passed and the sun was shining again. As the coffee at I'd had on arrival had been so good, I took M & U back for an early lunch and more coffee.

This is the first rain we've had since leaving the Warrumbungles/Coonabarabran way back in July, a novel experience, and one we'd rather minimise as much as possible.

We had thought about camping overnight at one of the free rest areas just outside Dongara, but the forecast was predicting continuing passing showers and squalls. Sure enough another heavy shower passed through as we reached Dongara to re-fuel. Consensus was soon reached on finding a caravan park with a cabin we could use for the night. So on down the coastal route via the Indian Ocean Drive to Leeman a small fishing village with a quiet caravan park where we found a cabin for the night.

After unloading the bikes, I went for a walk down the beach and watched as yet another line of squalls came in off the ocean. I sought refuge under a beach-side shelter and waited the squall out before returning to the caravan park. 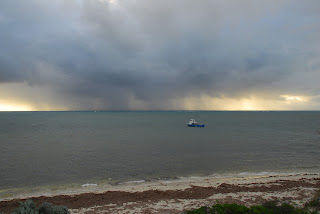 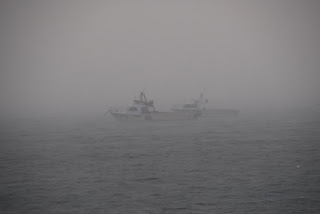 A good feed and agreement that tomorrow we continue on to my brother's place in Perth. About 250km – as long as the weather is not to bad it should be an easy run.

We are looking forward to 'chilling' in Perth for a week or so, while we wait out the impending WA school holidays, have our bikes serviced, clean our gear and catch up with family and friends. Lets hope the weather improves before we head south towards Margaret River and along the south coast to Albany and Esperance.
Posted by DrParnassus at 10:49 PM